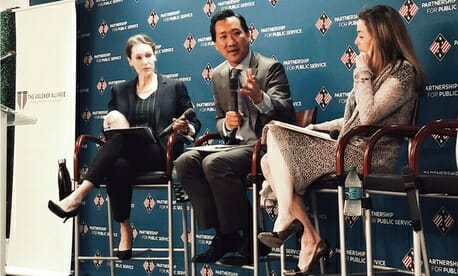 At a civil service reform town hall hosted by the nonprofit Partnership for Public Service, Office of Personnel Management Director Jeff Pon defended the Trump administration’s plan to freeze the pay of all civilian federal employees in 2019 as needed to “collect data” on compensation and as a chance to “right-size” the pay for different government occupations.

“I’m not one for a peanut butter approach for how to compensate people,” Pon said, referring to across-the-board pay increases. “This is a chance to ask, ‘Hey, are we overpaying some occupations and underpaying others?’ Then we can try to right-size the underpaid jobs, and then the overpaid ones will take care of themselves through attrition.”

Pon and Office of Management and Budget Deputy Director for Management Margaret Weichert discussed their visions for civil service reform, including overhauling the government’s compensation structure and providing greater retirement flexibility for feds to improve the hiring process and recruit the next generation of public servants. Weichert touted the White House’s proposed $1 billion interagency workforce fund, which would fund pilot programs for innovative personnel systems.

“There’s a real competitive market for talent, and we need to apply much more market-driven competitive realities,” she said. “We have to take a total compensation perspective, and take a lot of data from different sources. Today, it’s much more than just looking at pay. In the marketplace, people look at total compensation, all the things a job package has to offer, including retirement, job security and other elements.”

But shortly afterward, Pon defended a series of cuts to federal employee retirement programs, which he advocated in a recent letter to House Speaker Paul Ryan, as not part of the compensation discussion.

Among the proposals are the elimination of the Federal Employees Retirement System supplement for employees who retire before age 62, changing the basis of retirees’ defined benefit annuity payments from their highest three years of salary to their highest five years and a multi-year increase of the amount employees contribute to FERS. The plan also would eliminate cost-of-living adjustments for FERS participants and reduce COLAs for Civil Service Retirement System retirees by 0.5 percent.

“Those are annuities, not compensation,” Pon said. “[These] things, like the change from high three to high five, are very modest proposals. We want to restructure the whole compensation model for the federal government, and there’ll be a lot of people who are relieved, because we’ll be grandfathering in a lot of different types of things.”

While some proposals would only impact workers going forward, the changes to COLAs, as proposed, would impact “current and future retirees,” Pon said in his letter last week.

Pon said the government must adjust how it provides retirement to adapt to a workforce that is far more likely to switch jobs frequently, rather than stay in one organization for decades. And federal workers in good standing should be able to be brought back to the workforce outside of the competitive hiring process, if they temporarily leave an agency to work in the private sector.

“We’d like to provide defined contribution programs, and we want to make sure the federal employee can own their investment, take it with them, and come in and come out of government,” he said. “I don’t believe we should look at it as having a federal job for 30 years, retire and then have a lifetime retirement anymore.”

Weichert said that part of any effort to recruit the next generation of federal workers has to be how the jobs are pitched, which she said dovetails with her desire to counter the “Drain the Swamp” rhetoric popularized by President Trump.

“In government, we have the best purpose and the best mission: we’re here, serving the American people and making lives better,” she said. “These are the best jobs, and we’re working to make sure you can make a difference in doing these jobs . . . It’s about telling stories not only about what our people are doing, but more importantly, how are we helping Americans and how we’re actually doing the mission.”

To learn more about your retirement benefits, please visit our contact us page to request your personalized retirement review.