Senator Tries to Ensure That at Least 14,000 Feds Have Their Pay Frozen Next Year 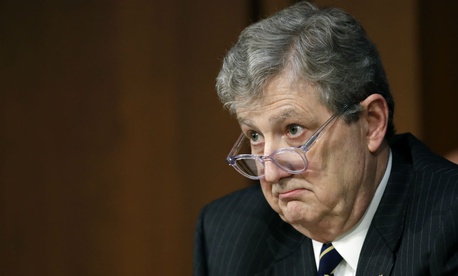 As the Senate began debate Monday on another minibus spending bill, one Republican lawmaker renewed his push to freeze federal employees’ pay, albeit on a much smaller scale than President Trump has proposed.

Last week, Sen. John Kennedy, R-La., introduced an amendment to the fiscal 2019 appropriations bill for the Defense, Labor, Education, and Health and Human Services departments (H.R. 6157) that would freeze the pay of the more than 14,000 employees at the Labor Department next year, unless the department devises a plan to reduce “improper payments.”

In June, Kennedy unsuccessfully attempted to insert a pay freeze for all federal civilian employees in the fiscal 2019 Financial Services and General Government appropriations bill, an effort that was voted down by the Senate Appropriations Committee 29-2. The committee instead approved a 1.9 percent pay hike for federal civilians in 2019, setting up a fight with the House, which backed President Trump’s proposed pay freeze for federal employees.

A spokesperson for Kennedy declined to comment on what payments from the Labor Department were “improper,” and directed inquiries on his amendment to a June 28 statement issued following the failure of his governmentwide pay freeze proposal.

“Washington is on a spending spree, and it’s time for some change around here,” Kennedy said at the time. “My amendment would have saved hundreds of millions of taxpayer dollars in a payroll that tops $270 billion annually. We could have used the savings to pay down the national debt and invest in our children’s futures. It may have only gotten two votes, but at least I tried. And I’ll keep fighting to curtail government spending.”

It is unclear whether the Senate will allow the Labor Department pay freeze proposal to come to the floor for a vote.

When the House returns from its August recess after Labor Day, it is expected to go to conference with the Senate to hash out the differences between the two chambers’ versions of the fiscal 2019 spending bill that includes Financial Services and General Government funding. Among other differences, the negotiators will decide whether to keep the 1.9 percent raise for civilians governmentwide that is in the Senate’s bill.

It’s always good to get all of the facts, especially when you are closer to retirement.  We offer free Federal Retirement Reviews for all Federal Employees working within the Federal Government, just fill out the simple Contact Us Form for your free review.