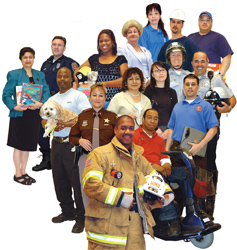 You’d be forgiven if you wish you could ditch the feds for the private sector. After all, you have seen how those executives, hedge fund managers, big-time lawyers, and lobbyists live it large with their stately homes in leafy suburbs. Perhaps you are wishing had you switched careers, that could be you.

The chances are that you have heard about your college mates having it good. Talk about big end-year bonuses, stock options, and profit-sharing deals. After all, you are no different. You went to the same college, took similar courses, and graduated the same year.

You are probably wondering: “with my drive, talent, and skills, I could be better off in the private sector.” The truth of the matter is that you are probably not.

That’s right. If you thought you’d do much better outside of the federal sector, think again. At least, that’s what a recent study by the FRB (Federal Reserve Board) has confirmed. What’s more interesting is that more than 12,000 non-fed American employees took part in the study involving a series of surveys and polls.

An incisive look at the study shows that life outside of federal sector isn’t a bed rose:
Approximately 30 percent of adults surveyed indicated that they don’t have a steady income every month. What’s more worrying is that most of them claim that they cannot cover their monthly expenses with their paycheck. Still think your paycheck and federal retirement benefits are not good enough?

Nearly 37 percent of adults responding to the polls said that they don’t have any retirement benefit plan such as IRA, 401K, etc. What a wake-up call, right? As a fed, you can always count on your federal retirement benefits to take care of you in your retirement.

A further 25 percent of participants said that they have neglected medical care because they simply could not afford dental care for their children.

40 percent of those polled indicated that they don’t have sufficient money reserve in their bank accounts or elsewhere. That means 40 percent of Americans working in the private sector don’t have enough cash to pay for emergencies like car repair bill, sudden medical expenses, etc.

Think for a second. With robust federal retirement benefits, the TSP’s 5% match, health coverage when you’re in service and retired, and more, staying in the fed fold is perhaps the best decision you have ever made.